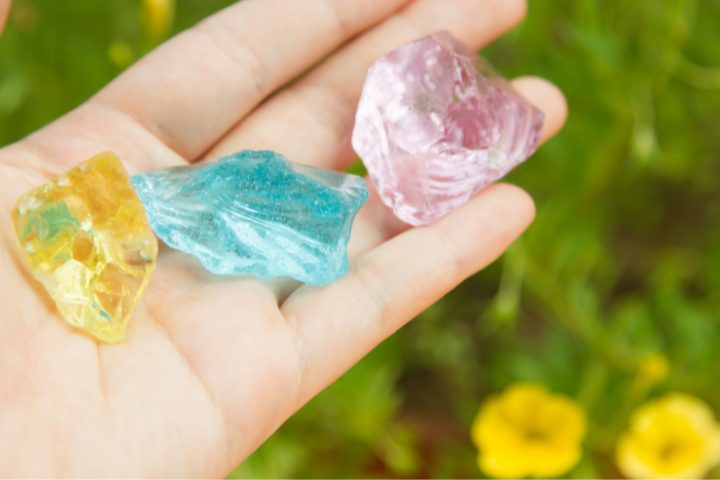 Born in the months of october and november, scorpions are smart, loyal but true to themselves. Here are the best scorpio chakra stones that work well with various chakras in your body if you are born in the sign of the scorpion

Scorpios, the people born between October 23rd and November 21st, are known to be passionate, clever, loyal and independent.

However, due to specific challenges in life, their ability to become their best selves deteriorates to the point that they feel lost and unguided – this is where the role of sacred chakra stones starts!

Like any other zodiac, Chakra stones work with the Scorpio sign to release stuck emotions, break the negative thought pattern, and open the person’s heart to get the best out of their abilities.

So, if you are intrigued and interested to learn more about chakra stones for Scorpios, this article might be an excellent place to start your journey.

There are several ways that chakra stones can bring health, wealth and prosperity to the Scorpio sign.

However, you must know which stone would work the best with you and your block, and this is why we have come up with the 20 best Scorpio chakra stones for you to choose from, and we have listed them all below.

One of the most revered stones from ancient times, Yellow Topaz, also known as Imperial Topaz, is one of the primary birthstones of Scorpio. It emits class as it sparkles in golden yellow and is used explicitly for manifestation during Scorpion season.

Its brightening light can quickly release the dark and the negative while inviting abundance and love into a person’s life. Thus, it also creates a powerful aura around the person to keep their astral body glowing.

Unakite is known for its energy of love, compassion, and kindness, for which reason it is also referred to as the stone of healing. It also teaches this sign how to heal their emotional wounds and navigate through the challenges. It also removes the blocks from the energy body and helps it tune into a higher vibration.

Since Unakite only flows in the energy of love and compassion, it makes an excellent stone for good luck. There are many more traits of Unakite that can help uplift one’s mind to high levels of consciousness.

Turquoise was used as a talisman for kings and warriors, even shamans in ancient times. Its effects are pretty similar in the present time; that is, it is used to protect the Sagittarius sign and others.

It is also a great stress-reliever and brings excellent luck to your personal and professional life. The beautiful Turquoise also creates a strong aura around the person to keep them safe from harmful energies.

The chakra stone of transformation, creativity and intuition, Labradorite carries interdimensional powers and, thus, quite magical.

For Sagittarians, this unique chakra stone has many uses. For starters, it enhances mental clarity and increases intuition, and then it develops clairvoyant abilities in people who keep it close. Thirdly, it also supports the total transformation of the person by bringing their inner truths to the surface.

The stone of spirituality, Malachite, absorbs harmful energies and clears the chakras. It soaks the lousy energy and replaces it with fresh vibes. It is known to deal with fearful thoughts while also opening the path to transformation and expansion.

Scorpio is a water sign, so it is sensitive and has to deal with many emotional changes. Malachite helps maintain the body’s dynamic balance while also ringing in possibilities of growth.

Apache Tear, a tender form of Obsidian stone, is known for emotional cleansing of the body, calming the mind, and attracting spiritual energy into the home and body.

It also protects the owner from unwanted energy while grounding the body to the root chakra. They can completely rejuvenate the body of Scorpions by making them aware of their thought patterns.

In ancient times, Opal was considered an amalgamation of Amethyst, Garnet, and Emerald and was worn to attract luck and good energy.

For Scorpions, the Opal stone boosts creativity, memory, and confidence. It also connects one to their higher self and thus, shows them the deeper truths of life. It fulfils the person from within with the energies of love, kindness, compassion, and purity.

Color – Any color of the visual spectrum

The stone of magic, charm, and spirituality, Charoite heals the emotional fears of Scorpions. It is a powerful balancer of chakras and deeply connects the person with their higher self.

Once the person is connected deeply to themselves, they can face any fear that comes in their way and release it for good. Charoite is thus, also a good stone for Scorpions who are blocked due to fear and are thus, unable to reach their goals.

One of the oldest chakra stones, Botswana Agate, comes from the land of Africa where it was used to encourage infertility thousands of years ago.

This stone carries the energies of protection and healing, which release stress from the body. It also releases emotional baggage by breaking the pattern of destructive thought patterns. For Scorpions, this chakra stone is used for grounding and helping them in day-to-day problem-solving.

Scorpions are known for their mystical nature, and so this stone helps them open up to life and the people who love them. Due to its aggressive nature, Bloodstone actively removes negative energy and makes space for new and healthy experiences.

Carnelian stone can completely transform the personality of a person who is born under the Scorpion sign. It increases the person’s self-worth by encouraging self-expression, dreams, imagination, and creativity. It also helps the person to express themselves authentically and fearlessly. Carnelian is, thus, one of the most suitable stone chakras for those who want to live their dreams.

Just like the Scorpio sign, Rutilated Quarts is also a water stone, and so it works pretty well for people born under this zodiac. This precious chakra stone provides all the sound vibrations to the owner, from security and safety to creativity and passion.

It also has a calming energy that settles or soothes the otherwise overwhelming emotions of Scorpions.

The stone of courage, or the Tiger Eyes, has the powers that can thoroughly cleanse you off negative energies. Once you are free from the stuck and unwanted energy, it fills you with positive energy and ultimately turns your life around for all the right reasons!

It also makes you more confident and creative in your abilities and helps you meet yourself on a deeper level.

Sugilite is the stone that encourages self-love in Scorpions. The people born under this sign are already good at maintaining relationships, but sometimes, they falter. During this time, this stone helps them become their better selves.

Sugilite brings up the feelings of love, compassion, and understanding in Scorpions and thus, helps them build stronger bonds with themselves and the people around them.

Amazonite is a chakra stone that brings Scorpions closer to themselves and, thus, to people around them. When people get to know themselves better, they automatically become a better version of themselves, do not allow negative energy to stay around them, and work intentionally towards their goals. Amazonite does it all for the Scorpio sign, and it also keeps the aura of the subtle body clean and encourages self-expression in people.

Made from rare minerals, this vibrant stone has powerful healing properties. It is also the stone of forgiveness and self-love and is believed to heal the past pain and stuck energy.

It transmutes emotional pain and opens your heart while building self-confidence, boosting creativity, and promoting self-acceptance.

Rose Quartz is the stone of love and dreams. It has the extraordinary healing powers that mend broken hearts and fill them with love for self and others. It is also known for restoring relationships among people and healing emotional wounds.

It is the same in the case of Scorpions; only, the ability to heal and feel love in this sign is more enhanced than in other zodiacs.

The stone of Goddesses, Moonstone, is a divine crystal that carries feminine energy and sensual vibrations. These vibrations help in soothing the emotions that often overwhelm Scorpions and hold them back from becoming their most fabulous self.

Black Tourmaline is often associated with safety and security. In the case of the Scorpio sign, its abilities are enhanced. It is also known for healing all body parts while rejuvenating them, so new energy enters the aura.

Howlite is one chakra stone that exclusively works towards releasing emotional baggage. It not only helps you calm down but also brings out the wounds that are buried deep into one’s heart.

Scorpions should keep Howlite with themselves, especially during difficult times. It will bring them to a peaceful state of mind as soon as possible,

How to Use Your Scorpio Gemstone?

The first thing to remember when you use crystals or chakra stones of any zodiac is to have a firm intention and strong belief in its working. They carry a spiritual presence and are pretty powerful. Many people believe that crystals or gemstones have consciousness and that they intuitively guide you on how to use them.

Once you have developed complete faith and intention in your gemstone, you can use it in the following ways.

Which stone is for Scorpio?

Yellow or Golden Topaz is the primary birthstone for Scorpio, and it attracts abundance in terms of wealth, health, and happiness towards the life of a Scorpion. Some other stones for Scorpio include Unakite, Turquoise, Moonstone, Apache Tear, Opal, Malachite, and more.

What is a Scorpio soulmate?

Virgo is the soulmate of Scorpio as it is most attentive to its needs of it. Mercury rules Virgo, so it knows how to understand and interact with Scorpion’s mind.

What is a Scorpios spirit animal?

The spirit animal of Scorpio is the snake since it is cunning, clever, dangerous, and yet calm. Like Scorpio, a snake also has an elusive mind and moves in silence.

Which metal is suitable for Scorpio?

Silver is a good metal for Scorpio, considering this sign is good at hiding its genuine emotions and doesn’t like to come out of its cocoon. It is hard for them to show their true selves to the world, so silver works wonderfully well for a Scorpio and helps them come out of their comfort zone and explore new possibilities.

What is a Scorpio lucky color?

Black is the lucky color of Scorpio since it absorbs all other colors and neutralizes them. The color also represents sophistication, mystery, elegance and many other traits that resonate with Scorpio.

Apart from choosing the right gemstone for the Scorpio sign, it is also essential to know which out of all the chakra stones is the most suitable for you. Thus, it would help if you used your intuition to learn the gemstones that are the best for you.

In this regard, we would also suggest you take an expert’s advice and guidance to fulfil your goal of finding the chakra stone that would work best with your zodiac. Thank you for reading, we hope we have covered all the points that you were looking for.