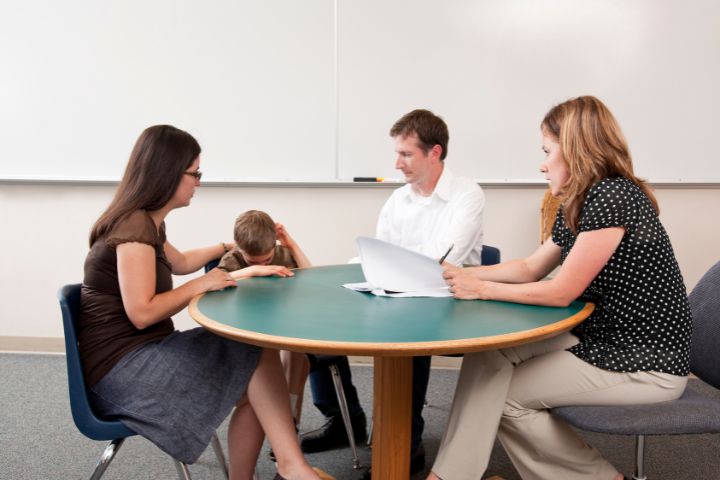 Have you been experiencing angry parents as a teacher? Here’s how to deal with angry parents, and what you can do in case you get in an argument with one.

According to the National Centre for Education Statistics, 49.4 million students in public schools and 4.7 million in private schools attended pre-kindergarten to grade 12 in fall 2020. With this many students, it is common for teachers to deal with a situation where there are angry parents from time to time.

Even if you do everything right, you can not please everyone. However, there are some tips you can use in such scenarios. Before talking to an angry parent, try to learn the cause behind their anger. Let us look at the reasons behind the anger in parents and how to deal with it.

What Are Some Common Sources Of Anger In Parents?

The common reasons for parental anger are:

If a parent feels that their child’s rights are violated, or they are being mistreated in school, their emotions and anger are justified. The violation can be anything, from bullying to discrimination.

Often, a parent has a genuine reason for being angry. It now depends on the teacher to get to the bottom of the issue and find whether it is a misunderstanding of the truth.

If parents had a bad experience with their child’s previous school, they developed trust issues, and no matter what you do, they will find negativity in your classroom. In such a scenario, as a teacher, you should keep reassuring them that you want what is best for their child.

Another reason for angry parents is their behavior. In the past, they got what they wanted by being aggressive, or maybe they learned this behavior from a young age. The only way to deal with such parents is to let them vent their anger. However, set boundaries as to what is acceptable and what is not. Don’t let them disrespect you.

Some parents have an aggressive way of talking. Please do not get into an argument with such people, as they thrive on drama. Make sure you set a clear boundary for what you will not tolerate.

As teachers, you have to deal with a situation where there are angry parents every now and then. There are a few tips you can follow next time you face an upset parent.

1. Listen To What They Have To Say

Let the parents speak their minds. Do not interrupt them in between their venting. Most of the time, children’s families have genuine reasons for being angry. First, listen to what they have to say. Only then will you be able to come to a solution to their problem.

It can be challenging to stay calm when someone is aggressive, but you must remain calm while dealing with angry parents. Take a deep breath before responding to anything.

Staying calm will not just help you think straight, but you will also be able to come up with a reasonable solution to the issue the person is having. It can get difficult if you have to listen to parents complaining, but if you remain calm, you will be able to treat them respectfully.

When a parent is angry and complaining about something, let them know that you understand where they are coming from. Empathize with them, and don’t dismiss their concerns.

While you should never stop a parent from expressing their concerns, you should also not let them trash talk to you. Make sure that you set the limits and boundaries for what is acceptable and what is not.

If a parent is being abusive or shouting, you can tell them calmly that you will not listen to what they have to say unless they correct their tone. If you are having a telephone conversation, tell the parents that you are hanging up and will be ready to talk if they talk calmly. Setting up a rule like this helps people realize that they are being unreasonable.

It would be best if you let the parent know that you will look into the issue and resolve it.  Take action where it is necessary and try to make sure that you address the core of the concern.

Following up is an essential step when dealing with angry parents. Once you have addressed the issue, give a personal call to the parent to let them know. Do not talk about the issue, but let the parent know that they can come to you if they ever have any problems again in the future.

There are a few things that you should never do while handling angry parents.

Don’t give in to unnecessary demands.

Listen carefully and understand what a parent has to say, but that doesn’t mean you should let them tell you how to teach. No one knows your job better than you do. Please do not give in to a difficult parents unnecessary demands when they are being disrespectful to you.

Tell them that school policy does not allow it. Let them know that you will try to resolve their issue, but set boundaries as to what you won’t tolerate.

When a irate parent is expressing their concerns to you, please do not ignore them. You should try a diplomatic approach while dealing with angry parents. Try to find a solution that has the child’s best interest. Remember that acting defensively with an angry parent will not help.

Don’t reason with parents who are not ready to listen

There will be some parents you can not reason with. No matter what you do, you can not make them happy. Instead of losing your calm over them, you should tell them that you will do what is best for their child.

Maintain your dignity and professionalism

Dealing with an angry parent can be frustrating, but you should maintain professionalism. You should never take out the anger and frustration on your students or colleagues.

Let the administration know if someone’s being disrespectful

‘If a parent is crossing the line in anger, you should let the school’s administration know. They will help resolve the issue that you are having with the parent.

Do I have anger issues because of my parents?

Yes, you can have anger issues because of your parents. Children at a young age learn what they see. If parents have anger issues that result in outbursts, then a child seeing that will think that is how people express their anger.
Many people with anger issues can relate it to their parents and grandparents. If you had aggressive parents, then your anger issues might result from that.

How do you talk to an angry parent?

Staying calm is the first thing you should do when dealing with an upset parent. You should follow a few tips when talking to an angry parent.
Let them vent about the issues they are having and, after that, agree to resolve the problems.
Empathize with them. Tell the parents that you understand the reason behind their anger.
Even if the reason for their anger is not your doing, take responsibility and apologize.
Tell them that you will resolve their issue, and once it happens, follow up with the parent to let them know.

How might having an angry father impact a daughter?

Having an angry father can have a negative impact on a daughter. Also, continued such behavior may cause a long-term impact on a child. Even if the aggression is not towards the child, the child may develop PTSD and anxiety in the future due to the bad experiences.

If you are a teacher, you have to deal with angry parents once in a while. Remaining calm is the key to resolving the issues the parent is having. Most of the time, parents have genuine concerns, but sometimes they act aggressively even when there is no reason. We have discussed a few tips that you can use when talking to parents in either case.