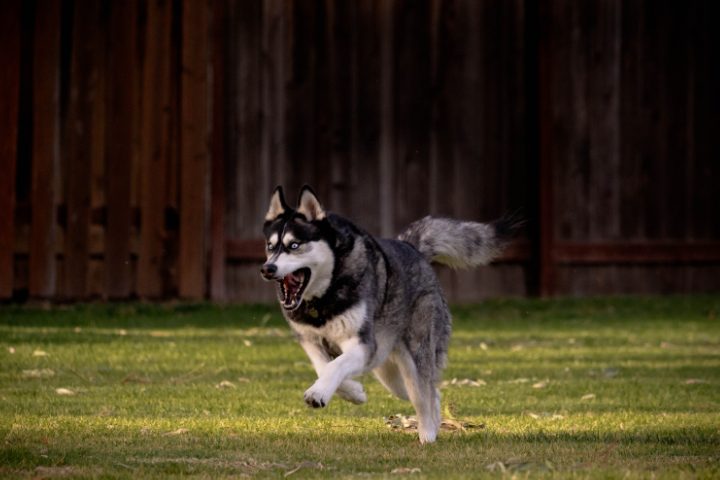 PosiIt can be difficult to deal with a pet who becomes aggressive, especially if they are large.  Let’s discuss how to deal with an aggressive husky and the reasons behind why your husky might be showing aggression

Dealing with an aggressive animal can be a difficult task. Huskies can start barking and become aggressive when they sense danger or threat from someone or some situation. They can behave in an unsettling and disturbing manner that would scare off you, your family members, or even your guests.

With proper training they are harmless, and you can assist your husky in behaving correctly instead of showing anger and rage. Furthermore, you can make sure that the husky feels loved and cared for with the presence of you and everyone around.

Why Is My Husky Aggressive?

Your husky can be aggressive due to many reasons, especially if he may feel a threat towards someone. Temporary aggression shown by the husky does not make them aggressive by nature. You can figure out various ways to calm them down. Some of the multiple reasons justifying the aggression of a husky are:

It is not mandatory that all huskies love to socialize in their surroundings. If they aren’t allowed to socialize with people or other animals, they instantly fear them and consider them a threat.

To save themselves and to survive, they act aggressively and might sometimes lose control. They can also show fear and anxiety when other animals surround them.

Huskies are dominant by nature. They tend to be in charge at all times. Some huskies do not listen to your directions to calm them down.

They are possessive of their belongings and do not quickly calm down. Biting, barking, and snatching are some traits that they show to other people or dogs around.

Depriving huskies of physical activity would eventually lead them to become aggressive. This can be attributed to the hormonal changes inside their body.

Huskies are energetic, and depriving them of activity leads to the storage of that energy which in turn is vented out as a hyperactive and aggressive behavior in dogs. So you need to get your husky running and playing around to keep their aggression in check.

Huskies are wild animals, with their natural habitat being a snowy forest. In the ecosystem, they find their survival by preying on small animals.

So when they are in a domestic environment, being near a small animal or rodents they are not accustomed to would set their mind to preying. In that case, the husky would become aggressive due to its strong prey drive.

Your behavior towards them

If you or the previous owner has mistreated your husky or has not showing them enough love and affection, they are bound to become aggressive.

Different Types Of Aggression In Dogs

Depending upon its surroundings, any dog can show an aggressive temperament. Namely, three types of aggression are seen in a dog: dominant, predatory, and territorial.

A dog can exhibit a single kind of aggression at a time, but sometimes it can also exhibit more than one reaction at a time. So you must look closely at their response and find ways to calm them.

Aggressive traits can be seen in your dog from a very early age. If you see them wanting to control you or your environment, make sure you don’t let them do that. Dominant types of aggression start from an early age.

This could be recognized as dominant aggression when you see your dog biting, snapping, and aggressively barking at people or other animals. Dominant aggression is inborn in dogs due to their evolution where competition over resources lead to the most dominant ones becoming survivors.

Keeping a check on your dog and correcting their behavior while they are puppies could compensate for this behavior. Correcting this behavior can be done by regular exercise and activity. Fixing up a training session with a professional trainer can be a better option to deal with that.

This is the most common type of aggression seen in a husky. Huskies are the kind of dogs that live in a wild habitat and grow a sense of praying for survival. If you have other small animals like rodents, cats, other small dogs, or even tiny babies, keeping a husky wouldn’t be a good choice.

They can attack children or other small animals. It is better to always keep an eye on the husky. If they show signs of snapping, erect tail, severe licking, erecting body posture, or charging at a group of animals or babies, make sure you immediately correct their behavior.

You must always make a dog feel loved at your house. This type of aggression starts when your dog demarcates a territory and thinks it is his sole responsibility to protect and save it.

If they keep on with this aggression, they will build up a habit of protecting you and your family at any cost. In one way, it is a good thing, but it would mean an aggressive attitude towards any stranger, be it your friend.

You can allow your friends or other strangers to pet them while they meet or take them out in a park for a walk. This way, he will learn that protecting his family from every stranger he sees is not always necessary. In other words, they would show aggressive traits to your friends and relatives as they are not as accustomed to the other people.

How To Deal With An Aggressive Husky?

Huskies should be made to feel that they are in a safe place where no one will hurt them. In the case of an unsocialized or rescued husky, they can find difficulties with people and become aggressive around them.

They can react to the situation aggressively if they sense a threat toward other dogs and people. But it has to be made sure that the husky is treated with love and affection, making them feel secure. Below mentioned are a few ways why which you can handle your aggressive husky:

Direct their attention to various things they can do:

While following the above rule, you must keep in mind that if they are aggressive by nature and get excited about tiny things, try to keep them away from aggression-provoking or reactive games.

Treat them with love and not rudeness:

The key point to making your husky listen to and obey you is treating them with lots of love, just like a small baby. Avoid being rude or portraying harsh behavior. Nowadays, so many healthy exercises and lots of training are possible without treating aggression with aggression.

Doing any of the above will make the husky aggressive and violent and make them not trust you anymore.

You have to look closely at the factors that trigger the aggression of your husky.

If you get to know what exactly the trigger point is, you can easily look up that section and then correct the behavior of your husky. Manage the dog’s environment and do not let them be in a situation where they can show aggression and violence.

Keep them in a friendly environment:

Make sure your dog is in a friendly environment. Let strangers or your relatives take the husky out for a walk in the park. This way, they will get acquainted with the person and then learn to like them. Furthermore, regular health exercises that teach them discipline will make them calm and content.

It is important to discourage bad behavior, but it is equally important to reward good ones. Positive reinforcement by giving your Siberian husky their favorite food, treat or toys when they listen to your commands will go a long way in mellowing down their aggression and helping them understand what is considered “appropriate” behavior.

We discussed earlier – husky’s were born and bred for the hunt. They need to be challenged through both physical and mental stimulation, otherwise their boredom can quickly turn into aggression issues. Give your dog a regular dose of fresh air and toys and games that help stimulate their minds.

If nothing else works, you can opt for obedience training from a professional dog trainer who has worked with and understands husky’s and their behavior issues.

Is it normal for Huskies to be aggressive?

No, huskies by breed are very loyal and energetic, but they generally do not have signs of aggression. This behavior develops due to other significant factors.

Why is my husky aggressive all of a sudden?

Huskies can get aggressive from time to time. It can be due to some pain they are suffering or the different types of aggressive factors that work within them.

Why do Huskies bite their owners?

When the husky sees how their owners ill-treat them, it can enable a sense of aggression in them. This could lead your husky to bite you.

How do I get my husky to listen to me?

Make sure you’re giving them proper attention and also that they exercise regularly. Make them obey you by asking them to sit and reward them with something they like. In this way, they will learn to follow you.

Do Huskies bite their owner?

It is not in their everyday behavior to be aggressive and bite people, but in situations where they feel they need to defend themselves or feel threatened by anything, they can bite. Make them obey you and discipline them so that they can control themselves and don’t lash back.

How to deal with my neighbor’s aggressive husky?

If you are ever in a situation where you feel unsafe or threatened by an aggressive Husky, try to remain calm and do not make sudden movements. Do not scream or run, as this may provoke the dog even more. Instead, try to slowly back away and keep your eyes on the dog. If you cannot safely remove yourself from the situation, try to use a deterrent such as pepper spray or a loud noise to scare the dog away.

Aggression is a sign of internal damage; no one wants to see their dog behave aggressively and cause harm to anyone. Always ensure that you can figure out the underlying cause of that aggression and then work widely towards mending them. Allow them to obey you and make them feel loved and cared for under your keep.